Craigellachie (pronounced Kra-GEL’-a-key) is Gaelic for “rock of alarm.” The Clan Grant motto is “Stand Fast, Craigellachie!” Craigellachie is the hill or mountain behind the modern town of Aviemore. It is also the name of a village situated about thirty miles down the River Spey from Aviemore.

Clan Grant Badge: A sprig of Scots Pine, usually worn on the clansman’s lapel or bonnet

During the halcyon days of the Clan Grant, it was the stated goal of the Chiefs of Grant to hold all the lands “between the two Craigellachies.” And they very nearly succeeded!

The belt and buckle clansman’s badge features a mountain in flames. In former times, large pyres or bonfires were ignited on high hills or mountains in Strathspey to signify a gathering of the men of the clan, to celebrate a joyous event, or to warn the clan of impending danger.

The Grantown Museum is a must visit on your trip to the Highlands and home territory of the Grant’s in the beautiful Strathspey region.  For a look at what’s on offer at Grantown following this link https://www.grantownmuseum.co.uk/about-us.html

The home of our Society – of the Clan Grant Worldwide – is the old Church at Duthil, close to Grantown-on-Spey. 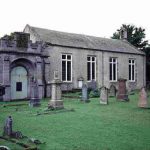 In its early days the church was in the diocese of Elgin Cathedral. The first Presbyterian minister was Andrew Henderson who was ordained in 1625. The present building was erected in 1826. The last sermon in public worship in the church was made by one of our Past Members, the Rev. G.V.R. (Jim) Grant MA. In the church grounds are two mausolea where some of the Clan Chiefs are buried.

The building is set in the midst of the Clan territories and there is some reason to suppose it may have been founded by our Patriarch Olav Hemingsson himself, probably shortly after 1060. The original dedication is to St Peter and the name Duthil for the area may well refer to St Dubhthac (to whom also the chapel at Rothiemurchus is dedicated). 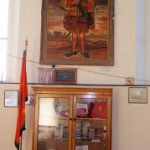 Fort George is a Georgian military fort at the mouth of the Moray Firth, opposite Fortrose. It was built expressly to quench the Jacobite cause in the Highlands following the failed attempt to seize the throne by Bonnie Prince Charlie in 1745-6.  https://www.britainexpress.com/attractions.htm?attraction=4454

The fort is named for King George II, who had it built to prevent any further Jacobite risings in the north. That helps explain why the most impressive defences of Fort George are directed inland instead of out to sea. Those defences are quite extraordinary; Fort George is the most imposing artillery fort in the UK, possibly in Europe. The fort is defended by a complex maze of ramparts and bastions, ditches and firing ledges. It holds a precious piece of Grant history known as the Seafield Collection and is a must visit destination.

Seafield Collection
On display in the cavernous Grand Magazine is the Seafield Collection of 18th-century armaments and military equipment. The Grand Magazine was begun in 1757 as a storage area for up to 2,500 barrels of gunpowder. Within this huge space is a collection of weapons and other military accoutrements issued to regiments by Sir James Grant (1738-1811).
Grant became clan chief in 1773 and served as an MP for Inverness-shire and later as Lord Lieutenant. During both the French Revolution and the Napoleonic Wars Grant raised and equipped his own regiments, issuing arms to the men under his command at his own expense. 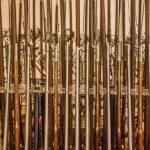 When the regiments were stood down in 1810 the soldier’s muskets, pikes, and swords were stored in Castle Grant, along with knapsacks and shoe-buckles. Everything else was sold off. The weapons lay at Castle Grant for over 160 years until the death of the Dowager Countess of Seafield in 1978. The Collection is now owned by the National Museum s of Scotland but is on a long-term loan to Fort George. It is remarkable to see row upon row of 18th-century weapons stacked neatly in the Grand Magazine’s vaulted chambers.